When is a Sin not a Sin? A Crime not a Crime?

For a long time a lot of people I knew believed that we cannot really blame criminals because they are predetermined to do certain things because they are products of their environment or because of some flaw in their chemical or genetic makeup. I believe that line of thinking when pursued to its logical conclusion takes away individual responsibility and implies wrongly that we are all helpless to resist our impulses.

That whole line of thought is parodied in a really funny song in the musical West Side Story, the 1961 filmed version of Shakespeare's Romeo and Juliet. In the musical two gangs, the Jets and the Sharks, replaced the rival Montagues and Capulets from the play.

In the song "Gee, Officer Krupke," the Jets gang mocks the social workers' view that they can't control themselves because, after all, pity them, poor things, they are helpless products of their environment.

I truly believe that in our non-judgmental culture that there still are a lot excuses being made for people that are just plain no good.

And I believe that a lot of tender-hearted people who believe that most people aren't fully responsible for their sins/crimes would change their minds if they thought about people committing sins that are undeniably heinous. If you think that a person's guilt is reduced if that person didn't fully consent due to a compulsion or if the person didn't realize the seriousness of the act, would that apply to these cases that come to my mind?
Wouldn't you be appalled to hear of these excuses? We all know that all of the above acts are sins. Most are crimes. We wouldn't make excuses for the people doing them, or blame their upbringing, would we?

At the end of "Gee, Officer Krupke," the Jets admit that the truth is that they don't want to work, they are gang members because they want to be, and that, all excuses aside, they really are no good.


Dear kindly social worker,
They say go earn a buck.
Like be a soda jerker,
Which means like be a schumck.
It's not I'm anti-social,
I'm only anti-work.
Gloryosky! That's why I'm a jerk!
BABY JOHN: (As Female Social Worker)
Eek!
Officer Krupke, you've done it again.
This boy don't need a job, he needs a year in the pen.
It ain't just a question of misunderstood;
Deep down inside him, he's no good!
I'm no good!
ALL
We're no good, we're no good!
We're no earthly good,
Like the best of us is no d*** good!

When I came back to the Church I accepted that the Church teaches that there are three conditions that must apply for an act to be a mortal sin. The Catechism of the Catholic Church says this about the conditions:


1859 Mortal sin requires full knowledge and complete consent. It presupposes knowledge of the sinful character of the act, of its opposition to God's law. It also implies a consent sufficiently deliberate to be a personal choice.

I don't quite understand how that is consistent with St. Paul's Second Letter to the Romans, in which he wrote that the Law of God is written in our hearts.

Here is a little story that illustrates what I think of some pitfalls of the common understanding of the Church's teaching on reduced culpability due to lack of consent. Ten tears ago or more, I went to a Carmelite monk to confess a besetting sin that I couldn't seem to stop doing in spite of the fact that I would rather die than do it again. I asked him if I could still go to Communion after committing that sin, which other confessors had told me would be okay because it wasn't really a mortal sin because I was doing it without my full consent.

Fr. Christopher wisely said something about how if I believed that it would mean that I had lost something essential to my full humanity if my sin could be excused that way, and it was dangerous to stop confessing the sin before Communion.

From that time on, I always went to Confession after that sin before I went to Communion. Even if strictly speaking I wasn't fully consenting, the sin was still a sin. And it worked for me. After many humiliating falls from grace and painful trips to the confessional, I was finally able to resist that besetting sin.

So, in my experience I have to say that humbly confessing a seemingly intractable sin after each time you commit it is effective in helping to get rid of the root cause of that sin.

I do wish that more priests would focus the penitent more on getting rid of the root causes for a besetting sin. There may be something that a person thinks is innocent that he or she is doing that is actually the root cause of the other sin, and once you know what that is and stop that occasion for sin, you will be strengthened to keep away from the sin. Humble returns to the confessional after each fall, prayer for guidance, and seeking the constant help of Our Lady and our Guardian Angel should be recommended for a penitent to gain insight about the root cause of a besetting sin.
As they say, "It's complicated."

Jesus's words in Luke 12:47-48 are about another required aspect of culpability, besides full consent, which is the aspect of knowledge:

The punishment will be reduced when a person didn't know he was doing wrong, but he will still be punished.

It's interesting to realize that the civil courts still impose penalties on people who commit crimes unless they are provably mentally incompetent whether or not they know the act is against the law.  Remember the old saying, "Ignorance of the law is no excuse"?

Part of the rationale for that rule is similar to St. Paul's statement that the Law of God is written on our hearts.  From the time of the ancient Greeks and Romans, it was believed that people know when they are doing wrong.

Cicero wrote the following in De republica (On the Republic):


"There is a true law, right reason, agreeable to nature, known to all men, constant and eternal, which calls to duty by its precepts, deters from evil by its prohibition. This law cannot be departed from without guilt. Nor is there one law at Rome and another at Athens, one thing now and another afterward; but the same law, unchanging and eternal, binds all races of man and all times.

What's the take away for Catholics? I believe it is important to understand that a person sins by doing a forbidden act even if that person has not learned what the Church teaches. That is what is meant by having the need for an informed conscience. We have an informed conscience when we humbly learn from the Church, who teaches us like our loving Mother, who cares enough to teach us the difference between right and wrong. If you don't learn the commandments of the Church, you won't be able to do what Jesus said you should do if you love Him, "Keep my commandments."

And be careful about making any excuses to yourself of lack of knowledge or full consent or a perceived irrationality in moral teachings.  God knows your heart. And you and God both know that deep inside yourself, you do know the difference between right and wrong, and you are responsible for your actions.

James Tissot's Painting of the Massacre of the Holy Innocents 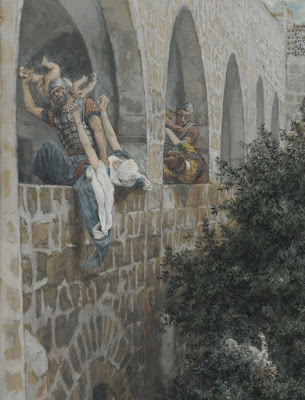